2022 is coming to a close and to send it off in style we are back with our second reading list of 2022, which has our recommendations of books published in 2022. These include books you may have missed because of the identity of the author, or their geographical location, or because the topic is not typically considered interesting to those interested in reading about the economy. We include 11 books that cover a range of topics that we think provide a richer understanding of socioeconomic phenomena and are therefore crucial to understanding economics and the world. 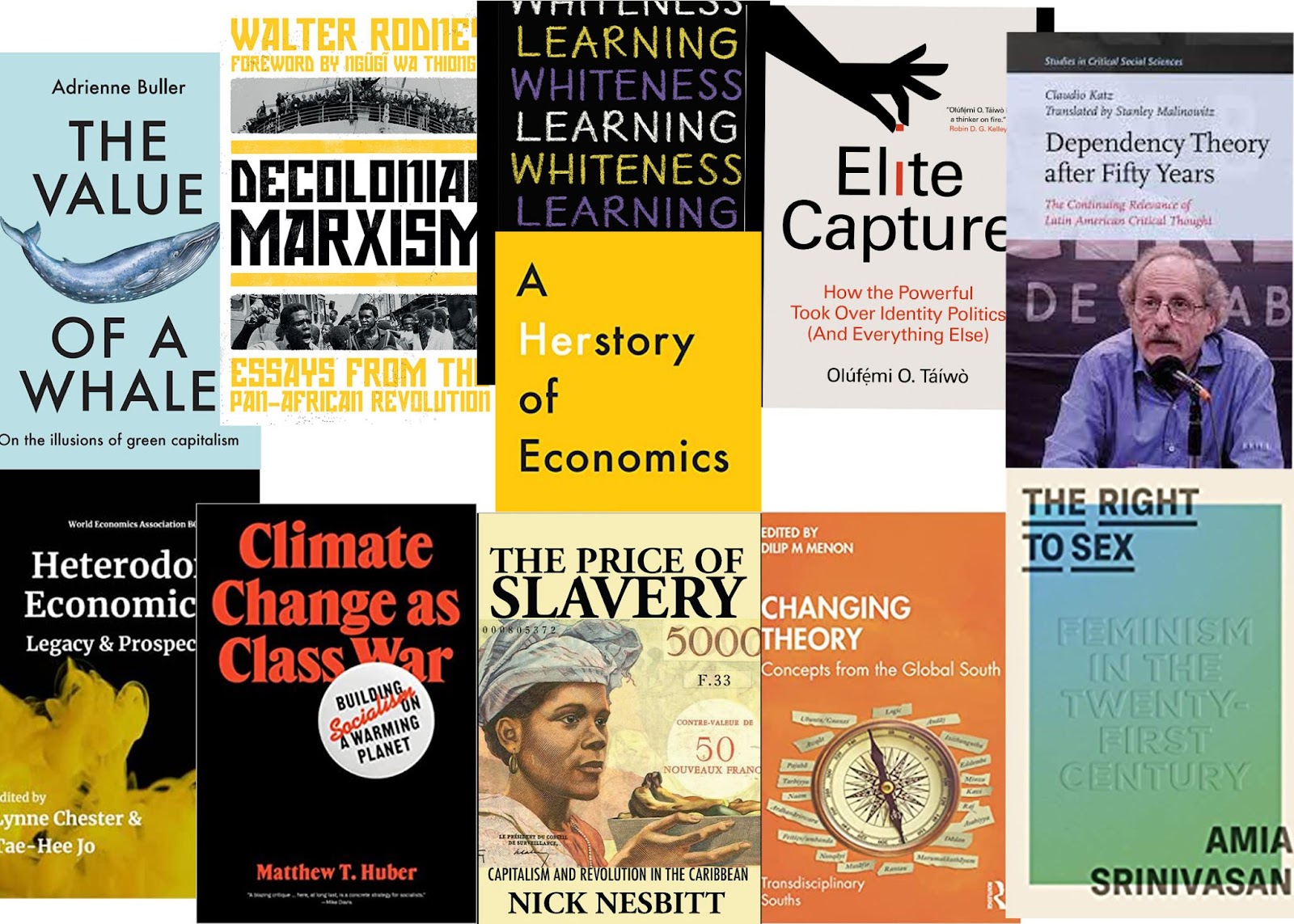 This time we include two books on understanding the ecological crisis facing the world: one that exposes the class conflict at the heart of the climate catastrophe, and one that questions whether green capitalism is capable of creating a habitable future for us all. This year, we also read books on how structural racism is reified through education, and how anti-racist and other progressive social movements are undermined by elite capture. Among the great new books this year, we found two books that engaged with Marxist analyses of racial capitalism and slavery, especially in the work of critical Black scholars from the Global South. As always, we cannot help but read about the economics discipline, and especially about the scholars and ideas that the field tends to ignore. This time, we read about the women in the history of economic thought that have been overlooked, about the importance of the vibrant discipline of heterodox economics, and about how Dependency theory has evolved over the past half century. We round out the list with a new volume on post-colonial social theory and a fascinating new book that looks at sex as a political phenomenon.

We hope you find some time to read these brilliant books. If you’d like to read more, you can find our previous reading lists here. If you enjoy our reading lists, please let us know by emailing us at info@d-econ.org, and please feel free to send us suggestions of books we should read and include in our next reading list!

A HERSTORY OF ECONOMICS

Where are the women in the history of economics? In this exciting volume, Edith Kuiper (a feminist historian of economics) uncovers the contributions of many forgotten women in the history of the discipline, showing that the contributions of women go beyond Joan Robinson and Rosa Luxemburg. By transforming the field of history into herstory, Kuiper describes how women economists have contributed to the making and discussion of economics, ranging from production, work, and the economics of the household, to income and wealth distribution, consumption, education, public policy, and much more. Kuiper elegantly shows how many important theories and concepts were left aside from the early formation of classical political economy until the end of the 20th century, providing a thematic summary of these contributions. It is a must read for those interested in economics from a different perspective, putting many unknown and forgotten names under the spotlight in a notably male-dominated discipline.

How has Dependency Theory evolved and transformed itself since the 1950s? How can it offer relevant insights for economists, politicians and the public debate today? In this volume, Katz offers a detailed summary of the foundations, evolutions and approaches of Dependency Theory in Latin America, focusing on the regional interpretations of Marxism, Developmentalism and World-Systems Theory. By touching upon structural issues of colonialism, imperialism, hegemony, power, and dominance, Katz eloquently connects Dependency Theory to the most up to date social issues that Latin America faces, as well as the challenges to overcome its permanently dependent condition under a trap of “subimperialism”. It is a must read for those interested in the contemporary economic and political reality of Latin America and the debates surrounding underdevelopment of peripheral countries.

Whiteness is a process of learning: one is not born white, but becomes one. In this rich and compelling volume, Sriprakash, Rudolph and Gerrard offer a meticulous (and eye-opening) reading of educational experiences and structures that endorse systemic racism. They examine the material conditions, knowledge politics and complex feelings that create and relay systems of racial domination, exploring how the structural formations of racial domination tied to European colonialism continue to be reinscribed across all aspects of social life, but particularly in education – which reinforces structural racism and social inequalities. The volume describes the example of Australia, using it to demonstrate how Australian education offered a grounded account of the workings of British settler colonialism as a globally enduring project. Further, they also summarise many educational practices of how one “learns whiteness” through materialities, knowledges, and feelings as a process of capturing and normalising identities. An impressive book for those interested in further deepening their knowledge about the role of education in perpetuating racism.

This edited volume offers an impressive array of essays aiming to profoundly change the Euro-American episteme of postcolonial theory and the politics of Western academy. It discusses eight main themes (relation; commensuration; the political; the social; language; rooted words; indeterminacy; insurrection) to drastically change social theory from the ground up, putting the theories and frameworks that emerged from the Global South as the main point of departure. Rather than arguing for a geographical South, it discusses the emergence of an “epistemological South”, and how it has been marginalised under centuries of exclusion. By arguing that colonialism and modernity has made us suffer from “intellectual amnesia” from regional knowledge/practices, the volume presents concepts from Asia, Africa, the Caribbean, the Arab World, and Latin America to reorient how social theory is (and should be) made. By putting a rich collection of chapters at the availability of the reader, this volume is a must read for social scientists, educationalists, developmentalists, economists, and the general public interested in finding out more about the variety of regional theories and interpretations about modes of living.

This is a fascinating collection of previously unpublished essays on Marxism by Walter Rodney. While the race-class nexus is a unifying theme of the essays, the range of questions and issues he delves into is incredibly broad, including Black Power, Ujamaa villages, forms of resistance to colonialism, radical pedagogy, programs for the newly independent states, anti-colonial historiography, and balance sheets for wars for national liberation. Interestingly, the book also demonstrates the way he explored and reinvented Marxism in light of struggles for economic independence across the globe. This is particularly relevant given the 50th anniversary of Rodney’s classic How Europe Underdeveloped Africa this year.

This is a crucial book at this moment of climate breakdown. Although there are many important books on class out there, there are not that many that integrate issues of climate change with class analysis. Huber’s book is therefore an incredibly important addition to scholarship on climate change thus far. He argues that while the carbon-intensive capitalist class must be confronted with its disproportionate effect on the climate, the contemporary climate movement – which is largely rooted in the professional class – has remained incapable of meeting this challenge. The alternative Huber proposes is a climate politics to appeal to the majority – the working class. His proposal includes building union power and transforming the energy system. Finally, and crucially, he underlines the importance of an internationalist approach based on planetary working-class solidarity.

THE RIGHT TO SEX: FEMINISM IN THE TWENTY-FIRST CENTURY

Amia Srinivasan’s new book is of crucial importance to economists and non-economists alike, and is especially relevant in the wake of the focus on consent that has pervaded public discussions after the #MeToo movement. It traces the meaning of sex in our world, animated by the hope of a different world. She reaches back into an older feminist tradition that was unafraid to think of sex as a political phenomenon. She discusses a range of fraught relationships—between discrimination and preference, pornography and freedom, rape and racial injustice, punishment and accountability, students and teachers, pleasure and power, capitalism and liberation. To grasp sex in all its complexity, including its relationship to gender, class, race and power, Srinivasan argues that we need to move beyond the simplistic views of consent in the form of yes-no, to rather consider the more complex question of wanted-unwanted.

THE VALUE OF A WHALE: ON THE ILLUSIONS OF GREEN CAPITALISM

Limiting global temperature increases to 1.5 degree celsius is the defining challenge of our time. To this end, economic actors have found ways to monetise and trade “ecosystem services”. The idea is that by creating a market in biodiversity and carbon offsets can create investment to prevent the unfolding environmental and climate catastrophe. In part, these efforts show how the Overton window has shifted from outright climate denialism to grappling directly with the realities of environmental degradation. Despite unprecedented levels of public knowledge and concern, commitment from governments, technical innovation, and the staggering impact of climate change and environmental damage on our lives, why are we still so far from a “habitable future and safe present?” In this great new book, Adrienne Buller poses these important questions about green capitalism, the effort to preserve existing capitalist systems and relations and ensure new domains for accumulation in order to respond to the ecological crisis. She argues that the dominance of the approach of green capitalism is self-defeating, and needlessly confines the shape of the society we need to build. Specifically, as regards the role of neo-classical economics and market governance in shaping green capitalism, this book is a must-read.

THE PRICE OF SLAVERY: CAPITALISM AND REVOLUTION IN THE CARIBBEAN

What is the role played by slavery in the development of capitalism? Nick Nesbitt revisits this question by examining Marx’s analysis of slavery across his seminal Capital. In addition, he outlines the writings of key figures in what he calls the Black Jacobin Marxist critical tradition, such as Toussaint Louverture, Henry Christophe, C.L.R. James, Aime Cesaire, Jacques Stephen Alexis, and Suzanne Cesaire, and argues that the critique of slavery, colonialism, and capitalism can be understood in terms of Marx’s social forms. He argues that even though slave-based production was crucial for the development of capitalism, in the Marxist sense, slavery was an unproductive system, that is, it does not contribute surplus value to the process of accumulation. Nonetheless, production by slave labor captures massive average profits for production even if they do not produce surplus value. He also takes the reader through the Black Jacobin thought on revolutionary overthrow of slavery, Antillean plantation slavery and competing social forms, and critiques of colonial forms of labor and the state. Nesbitt produces a theoretical articulation of slavery and capitalism that is illuminating and worth a read.

ELITE CAPTURE: HOW THE POWERFUL TOOK OVER IDENTITY POLITICS (AND EVERYTHING ELSE)

In this important and powerful book, Taiwo argues how important political movements are captured and derailed by elite interests, specifically by weaponizing identity politics. Identity politics, he argues, has equipped people, organizations, and institutions with a new vocabulary to describe their politics and aesthetics, even if the substance of those political decisions are irrelevant or counter to the interests of the marginalized people whose identity is used. However, this is not a failing of identity politics per se, but rather how it is used. Elite capture helps explain how political projects are hijacked and by those that are well positioned and well resourced, and how knowledge, attention, and values become distorted and distributed by power structures. He argues that movements need to build constructive politics that focuses on outcome over process rather than mere avoidance of complicity in injustice. It is a thought provoking book for everyone interested in the dynamics of contemporary political movements, and how effective political movements can be built.

This list was compiled by Devika Dutt, Danielle Guizzo, and Ingrid Kvangraven.